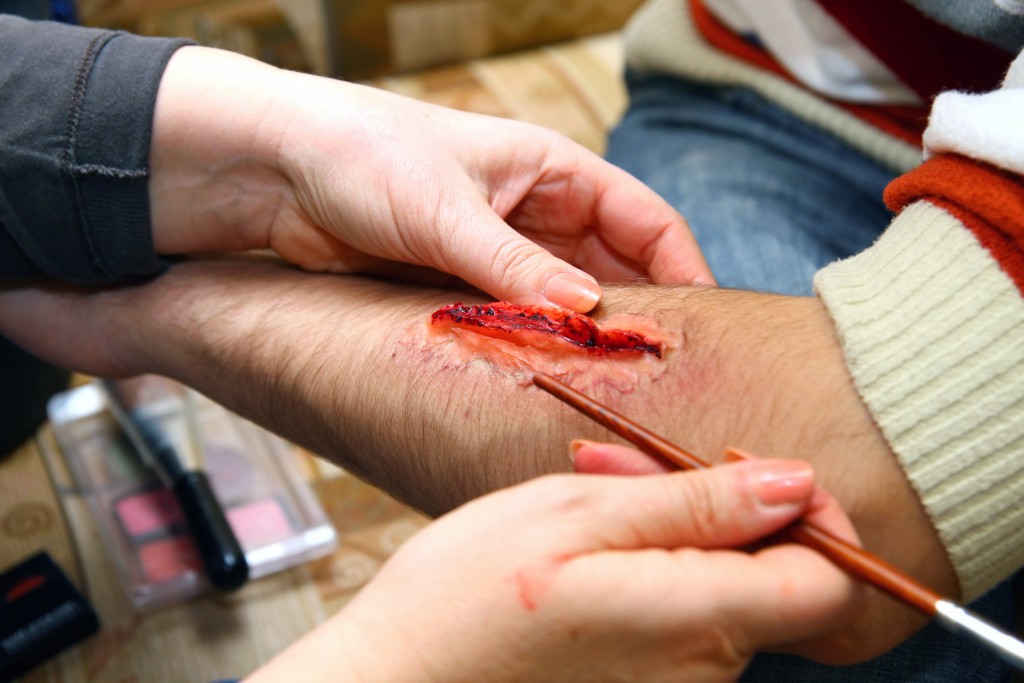 Makeup isn’t always glamorous! Special effects makeup can be used to simulate bleeding, bruising, wounds, and scarring that looks just like the real deal. Whether you’re doing special effects makeup for television, a theatrical production, or just a Halloween party, it’s important that you pay close attention to the details so it looks as realistic as possible.

Fake Blood –You can’t do special effects makeup without fake blood! Many special effects makeup artists pride themselves on mixing their own fake blood. All it takes is a little corn syrup and mixing it with red and yellow food coloring. Remember, it’s important your fake blood looks like real blood, so it shouldn’t be too thin or too bright. To make it thicker, just add flour or corn starch. To make it darker, add some soy sauce or chocolate syrup.

Bruising – To create the appearance of bruising on the skin, you’ll need to have a variety of cream colors and powder eye shadows in your kit. To create realistic bruising, it’s important that you understand how bruises change colors as they age. A new bruise is red, turns purple, to blue-black, and finally to green/yellow before it disappears. Apply the appropriate colors and blend well using a sponge. Because a bruise is a form of internal bleeding, it needs to appear that it’s underneath the skin. After you’re done blending the colors of the bruise, set it with a powder that matches the skin tone.

Liquid Latex –You can do a variety of different effects with liquid latex such as burns, scars, and wrinkles. Once it dries, it forms a transparent film that looks like another layer of skin. To create wrinkles, pull the skin outward while the liquid latex is drying. When you let go, the latex will wrinkle, creating the illusion of aging skin.

Modeling Wax – Modeling wax, or wax putty, can be used to build up areas on the forehead, nose, ears, or chin (any part of the body that doesn’t move much). To apply the prosthetic, simply apply the wax to the face and mold it into the shape you desire. Blend the edges with the skin and set it with a powder that matches the skin tone. Make the wax pieces as thin as you can, because heavier pieces are more likely to fall or move.

Sometimes you’ll want to create a certain effect, only to find that the items you need are missing from your kit. Try to be resourceful with what you have. There’s no limit to the things you can create with special effects makeup and a little imagination!

If you’re considering a career as a special effects makeup artist, it’s a great idea to learn the fundamentals by first going to beauty school. After you graduate, you’ll be able to get your cosmetology or esthetics license, which is required for most jobs in the beauty and entertainment industry.

Salon Success Academy is a beauty school with five locations throughout the Inland Empire of California. The beauty school offers extensive, hands-on training in cosmetology and esthetics, extensive preparation for the State Board exam, and financial aid assistance to students who qualify.