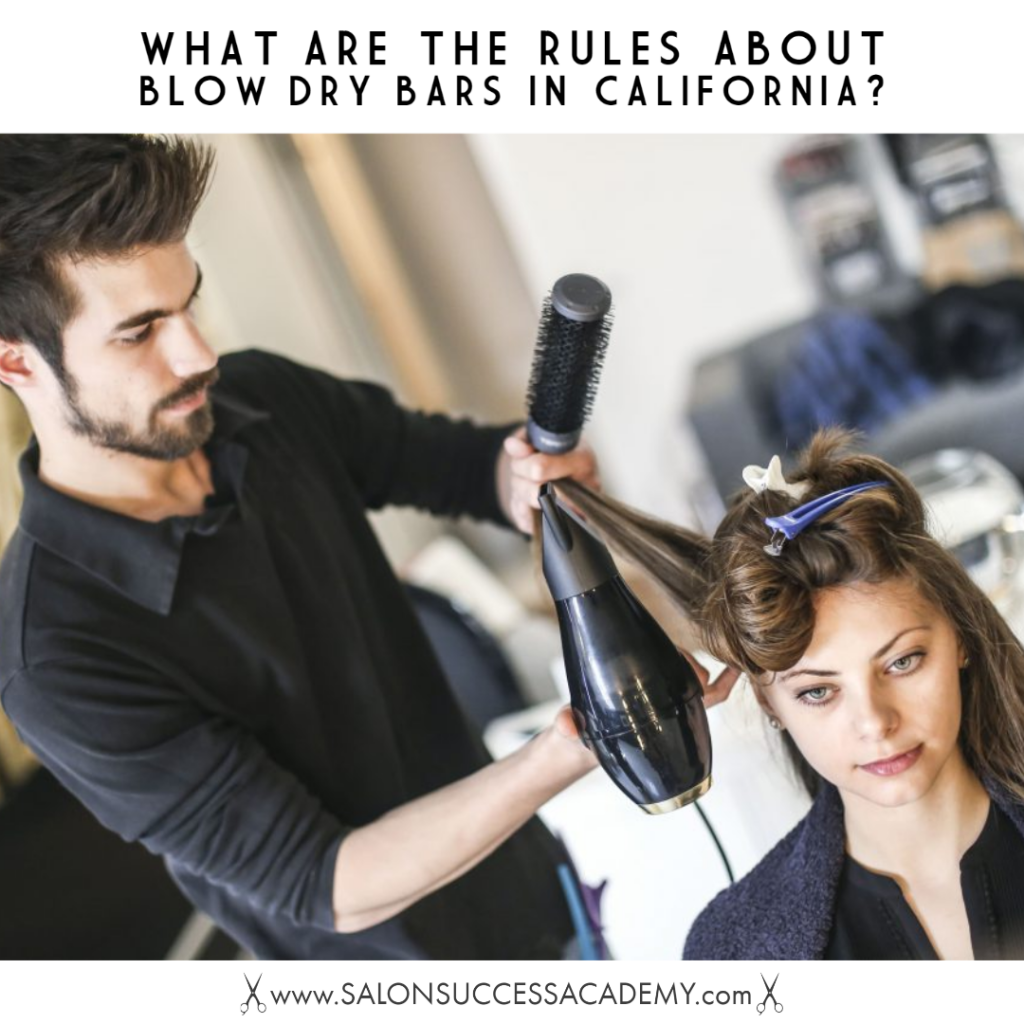 Blow dry bars have sprouted up all across California. But as popular as they seem to be, they’ve also created a lot of controversy. Many people in the industry, especially licensed cosmetologists, don’t like unlicensed stylists performing the tasks of their trade. Although blow dry bar stylists aren’t allowed to cut, color, or chemically treat hair, they do wash, blow dry, and style hair—without a cosmetology license. Is that even legal?

No, technically it’s not.

Under existing law, you need a cosmetology license to practice cosmetology1. Makes sense, right? But “cosmetology” includes, among lots of other services, the “shampooing, arranging, dressing, curling” of hair. “Hairstyling of all textures of hair by standard methods” is also considered a part of cosmetology and requires a license under State of California law.

Violations of the law, such as providing blow dry services without a license, are punishable by a fine. Whether you run a blow dry bar or just work in one, you could be found guilty of a misdemeanor and ordered to pay money to the courts.

The Lost Battle for Blow Dry Bars in California

Because there are so many blow dry bars in the state, a couple of years ago, State Senator Mike Morell introduced a bill that would have amended existing law to exempt certain services from being included in the strict cosmetology definition. Under Senate Bill 999, you’d be able to wash and style hair without a license. You’d just have to make sure that the clients you served were aware that you didn’t have one.

The way a bill becomes a law is that it first has to pass in the State Senate, then in the bigger State Assembly. In the case of Bill 999, it passed the Senate but then died in the Assembly. That means the original law stays just the way it is and blow dry bars need licensed cosmetologists to provide services.

What Was the Argument Against Blow Dry Bars?

If you’ve ever gone to a blow dry bar, you probably think they’re easy and convenient. Compared to a traditional salon, their services are also usually less expensive. So what’s the problem? For one thing, professional cosmetologists feel like untrained people are stealing their business. But professionals also know that any time you provide a public service, there are health and safety regulations. Citing public safety reasons, the Professional Beauty Association came out strongly against the Bill. Their fight may have been why legislators eventually refused to change the original law.

So whether you want to work in a blow dry bar or a salon, you’ll need a cosmetology license. Your training will teach you all about health, safety, and sanitation. It will also teach you how to cut, color, style—and yes, blow dry—hair. And you’ll learn how to provide facials, manicures, and pedicures!

If you’re ready to start on the path to a rewarding career in Cosmetology, fill out the form to get started now. Salon Success Academy has been training professional cosmetologists for 60 years. We can train you, too!