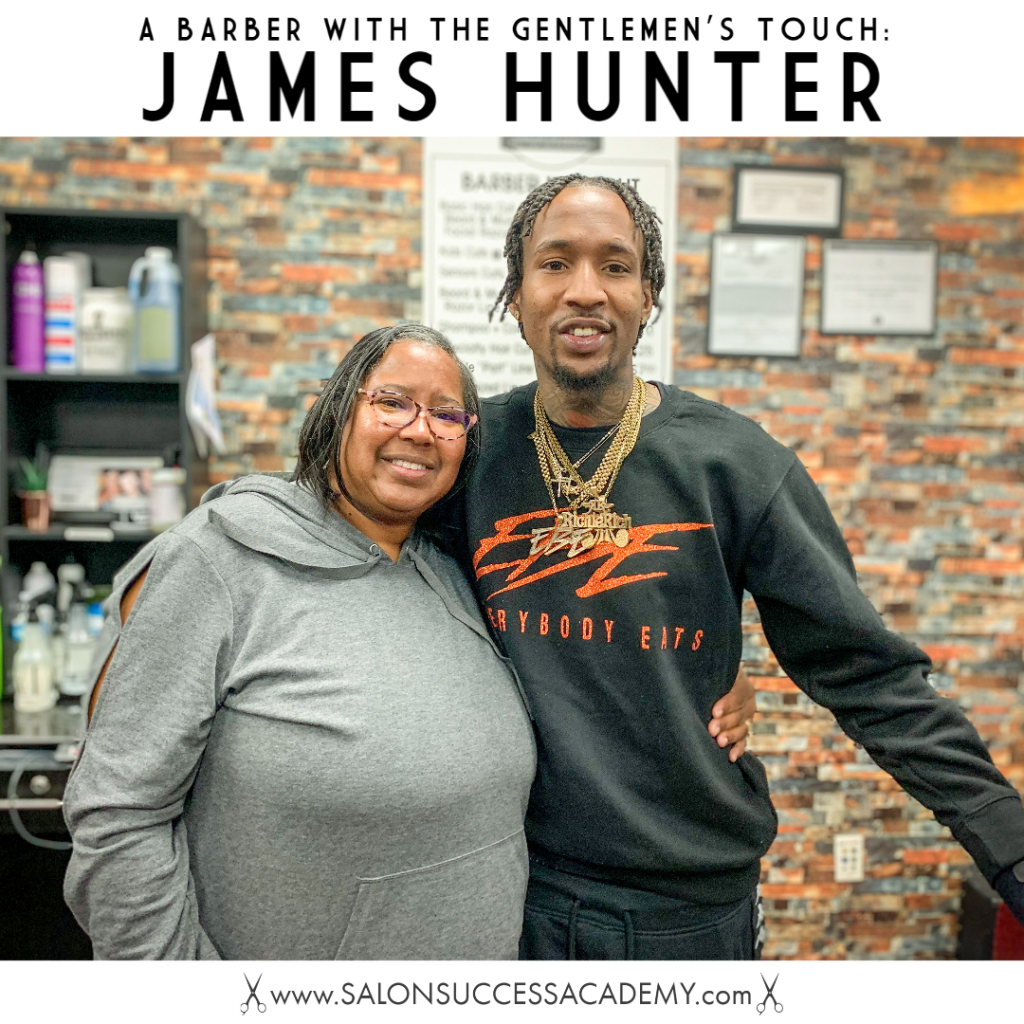 James Hunter didn’t take an easy route to his dream, but he still found his way. Thanks to a whole lot of determination, a passion for learning, and training from Salon Success Academy, James is currently the proud owner of The Gentlemen’s Touch Barber Shop in Beaumont, CA. And he loves what he does!

“I’m a magician,” says James. “I turn people into whatever they want to become.”

Always artistic, James loved drawing and cutting hair from the time he was young. But in those earlier years, James went down a wrong path. He got in a little bit of trouble, “a lot of trouble actually,” says James. He was living in South Central Los Angeles, hanging with the wrong crowd, making choices that limited his career options. He knew he could do more, could be more.

James enrolled at the Riverside campus of Salon Success Academy. He started off determined, eager to learn all he didn’t know about cutting hair. But in 2017, he lost his brother, fell down that wrong path again. He gave up on school. Walked away from his dream.

Don’t Quit Your Dream to Become a Barber

“Then Curtis came out of nowhere,” says James. “Don’t be no quitter,” he told James.

Curtis Speller is the Director of Admissions at Salon Success and he’s passionate about the school and its students. He has a remarkable ability to match students to programs and campuses. When James was ready to give his education another shot, Curtis moved him to Upland—and it was a perfect fit.

James came back more dedicated than ever. He had a crazy long commute. Even without traffic, it was close to a two hour commute each way. But he’d wake up super early, beat the traffic, tell whomever was walking on campus when school opened to knock on his car window. He didn’t want to miss anything. He was learning so much! He even participated in Barber Shop battles and won two competitions: Fade and Taper.

“Those were fun,” says James. “I had a ball and I wasn’t too nervous. I just listened to music and did what I had to do.” And he won!

Even though James had been cutting hair for years, he learned at Salon Success that there was so much he didn’t know. He’d mostly been cutting one kind of hair. Now he was learning about all the different kinds of hairs and styles. He learned about hair anatomy and the functions of the body and how everything ties into the head and the hair. And he learned the importance of sanitizing your equipment and providing excellent customer service.

“I’m the head boss,” says James. “You know there is always going to be a need for a barber everywhere in the world. Whether you’re going to school or work or on an interview, you’ve got to stay groomed. And if you’re a barber, you’re always going to be needed if you know how to do your job right.”

According to James, the key to success as a Barbering student is to “just keep pushing.”

“Just know you’re going to have hard times,” James says. “Understand from the beginning that this is serious and it’s hard work. There’s going to be times you’ll be ready to stop, but if you tell yourself you can do it, that negative part will go away. Go to the max. Never give up. And think about what you’ll be doing. Every hair cut is your creation. You create happiness for people.”

If you want to create happiness for clients with your Barbering skills, consider training for a career as a barber at Salon Success Academy.